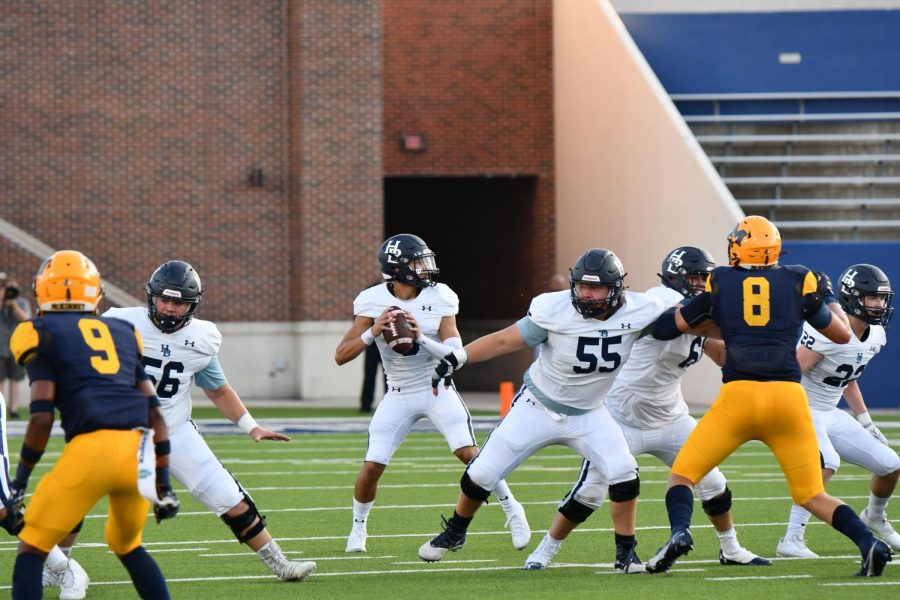 Senior center Jack Struebing (55) protects the line and the quarterback during a non-conference match-up again the McKinney (Tex.) Lions on Aug. 28.

Senior offensive lineman Jack Struebing, a four-year football starter, is the catalyst for the football team according to teammates. The 6’2”, 270 pound center lines up with a cast of all juniors where he leads the charge to protect the offense. According to 24/7 sports, he already holds offers from six Division I schools and is ranked as the 24th best player in Arkansas.

Struebing has much more experience than most on his team when it comes to varsity football. He’s had time to develop himself both mentally and physically during the past four years.

“I’ve developed a lot just maturity-wise and understanding the game,” Struebing said. “I’ve slowed things down since I’ve been in the 7A for four years.”

Struebing has great expectations for himself as both a leader and for his on-the-field play.

“I want to dominate the o-line and finish each block,” Struebing said.

His teammates have also noticed how he leads and motivates the offensive line. They have learned from his play over his years on the team.

“Jack has always been a good example for the juniors and sophomores especially,” said Hudson Parsley. “On the field I’ve learned how to be patient and use my fundamentals more rather than go for big plays.”

Struebing attributes his work ethic and mentality to his father, Don Struebing.

“My dad has held me to a high standard,” Struebing said. “I always have to give credit to him, his helping me out. He’s probably one of my main motivators.”

Struebing’s hard work has paid off for him. He has seven total offers including offers from six Division 1 teams. These offers include Auburn, Southern Methodist, Charlotte, Memphis, Miami, Central Florida, and Southwest Baptist. He started receiving these offers in his early high school career, but they have only increased since then.

“After my freshman year, Memphis and SMU reached out to me,” Struebing said. “Really, it’s a snowball effect once you get one big college. It all kind of builds up and everything gets out there.”

Some offers have meant a little more than others for Struebing.

“Gus Malzahn at Auburn meant a lot, and Miami still means a lot,” said Struebing, “but now that Gus is at UCF, that’s a pretty big offer to me and that still is one of my top schools I will consider.”