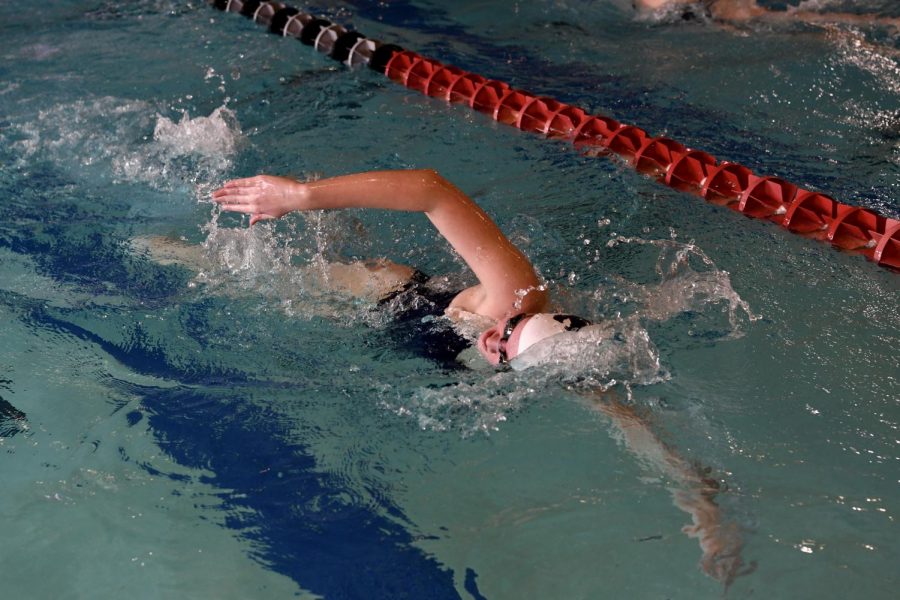 After all the hard-working practices at the Jones Center, junior Sarah Pope along with the swim team has been preparing to compete against other student-athletes at state. The swim team will compete at the Bentonville Community Center on Feb. 27. This competition is for all state qualifying swimmers in the 6A division.

“State is always the goal from the start of the season till the end. I was confident our relay was strong enough to qualify,” Pope said.

Pope has been on the team for three years.

“Going to state to me really means getting to be a part of the state team,” Pope said. “State is always the most fun meet of the year and I love getting to spend it with my team.”

Junior Abigail Livingston has been looking forward to competing in state.

“Going to state means a lot to me especially this season,” Livingston said. “Making it throw all the adversity with missing meets and getting corona to finally make it to an endpoint feels good.”

According to swim coach Nathan Whitten, the Swim and Dive teams have made it to state ever since the program has been at Har-Ber.

“This year is the largest amount of swimmers that I have seen at Har-Ber,” Whitten said. “Those numbers don’t happen unless each athlete feels welcomed. The experienced swimmers are very open to helping novice swimmers learn each stroke. That allows the whole group to bond as they achieve the same goal which is fast swimming!”

Whitten believes his student-athletes have proven they are more than capable of doing well at the state competition.

“The team is able to make it to state because of their goal-oriented personalities,” Whitten said. “You ask any swimmer and their goal is to be the best and make it. It’s not easy to get up early, make the commute across town and jump into a cold pool especially during the winter season, knowing that they push past that and get after it. It’s so easy to stay at home and sleep in but not these ‘Wildcat-Fish’. They want to compete and that attitude is what it takes to be a champion both in and out of the water!”

Although state will be the swim and dive team’s last meet, they are ready to give it their all.

“To my teammates, I would say, I know this season hasn´t been normal for us, but we still managed to make the best of it as a team,” Pope said. “Even though most of our parents couldn’t watch us race due to COVID, we were always at the end of the pool cheering for each other. State is our last meet of cheering before we go back into off-season training, so let’s have fun with it.”