Football team cashes in all the chips 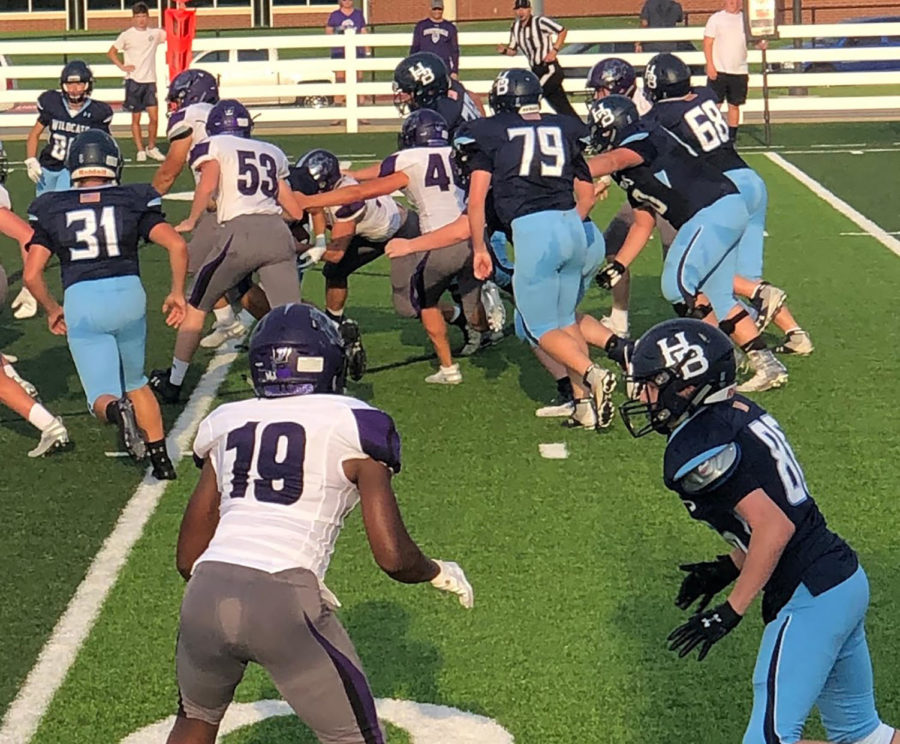 Senior fullback, Max Peña, looks around, making eye-contact with his teammates as he drops his poker chip, decorated with the number 22 into the basket before taking the field at Pulaski Academy.

During the prelude of offseason, head coach Chris Wood introduced the idea of tying the game of football to playing poker. When playing poker, a player will go “all in,” or put all their money on the table once they’ve used the last of their chips. So before every game, coach Wood has every player who is “all in” for the game to place a poker chip with their number written on it into a basket.  This metaphorical routine forms unity between the players before the game and creates the mindset of giving everything.

The Har-Ber football team was looking forward to a “bad beat”, but was, unfortunately dealt a hard blow. However, the team gave all they had and left it all on the field. When they returned home at 2:30 a.m on Aug. 29, they left with a sense of pride rather than discouragement.

“We didn’t give up…it set an awesome tone for the season,” wide receiver Hunter Wood said.

The scoreboard didn’t do justice for the grit and passion that shone through each player on the field.

“When you go into competition you’re gonna win the event or you’re gonna lose the event. We came up on the short end. P.A. did a great job. They executed better than us, especially in critical moments, but it’s a great learning opportunity… we’ve got a really good football team,” head coach Chris Wood said.

Until the next game, the ultimate fight for the championship is happening on our very turf as the Wildcat football team works hard to win over the state title each day in practice.

“We are gonna go off,” junior quarterback Noah Livingston said.

The team is looking forward to a “bounceback” season and to making a significant recovery from the rough past year.  Not only do the players see potential in the team this year, but the coaches as well have an immense amount of confidence in this new group of boys. According to defensive line coach, Robert Day, there is a noticeable difference in the team this year compared to last year.

“We have an older, more mature, team than we had last year,” Day said.

As a result of the enhanced maturity, according to senior safety Griffin Clampit, the team is prepared to adapt to any necessary adjustments to the lineup in case of drawbacks such as ineligibility, injuries, etc..

“We have a next man up kind of mindset. So if one person is out for whatever reason, the next person will come in behind and he’ll do a good job,” senior Griffin Clampit said.

Due to the substantial amount of talent on the team this year, filling positions would be an easy process. To avoid situations like last year, the coaches are being proactive in making sure every player is able to play.

“We’re just making sure everybody has their ducks in a row… we’re just being precautious,” Day said.

Not only does the team work hard together in practice, but they enjoy spending time together beyond the turf.  According to Livingston, the boys love hanging out together in the locker room. The team is proof of how concepts as small as a locker room or even a poker chip can kindle team chemistry. After a hard-fought game, such as the battle against Pulaski, most teams’ initial reaction is to blame a coach or a player. For Har-Ber, this was not the case. There was no blaming, nor was their negativity on the sidelines.

“The tone that was set that goes unnoticed is the culture on the sideline… there was no negativity, there was no blaming. That’s what you look for if you’re gonna have a championship team. You can’t have a team that’s gonna turn on each other when things go bad, “ Wood said.

The team is looking forward to a successful season and with each player “all in,” this season could be Har-Ber’s revival.