And then there was a virus 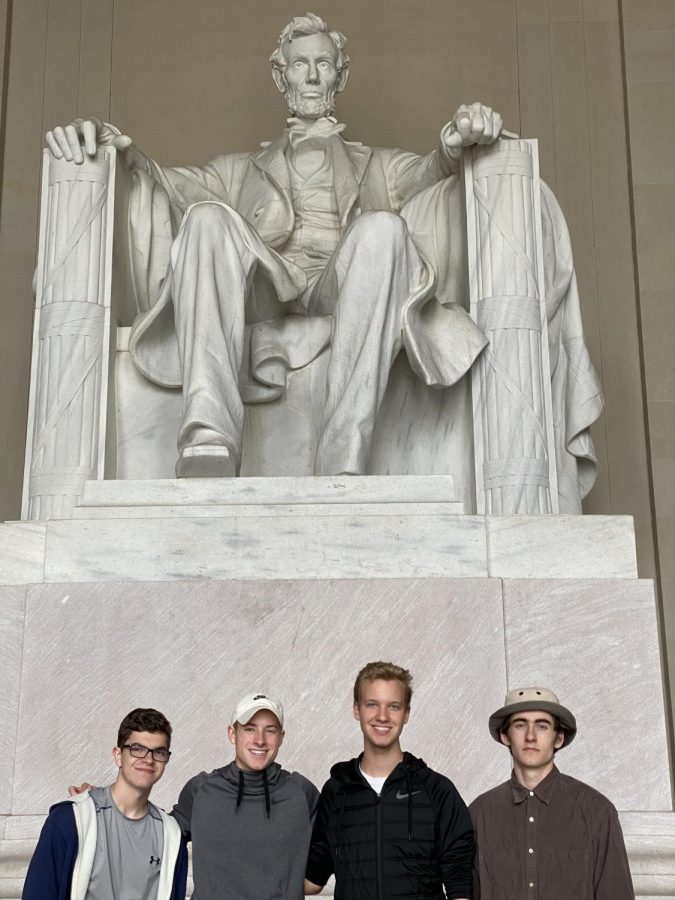 Seniors Zack Duplanti, Nick Luttrell, Zack Greenwood and Jack Williams visit the Lincoln Memorial in March 11-13 during a trip to Washington, D.C. for the Student Television Network convention. Shortly after students arrived, the convention was canceled.

When numerous WHO officials first posited that preparing for a US based coronavirus pandemic was not a matter of if but when, I almost felt a kind of security in that. The last time the WHO said something like that it was about Ebola, and the airports were really the places where their presence was felt at least as far as I could tell.

Let me step back a bit. At the beginning of this year, I joined the film program in the fundamentals class, and worked pretty hard to get into the advanced film program the following semester. With getting into the Advanced Class, I was also invited to go to a competition that many of my friends from Har-Ber and elsewhere have attended in the past, a competition that was really where our program could have made a name for itself this competition season: the Student Television Network conference in Washington DC. It really meant a lot for me to be invited because I had just come straight out of fundamentals weeks prior, and everyone else there had been in the program for quite some time. Mr. Sherman was kind enough to invite me.

Three hours after we landed in Washington DC, from XNA to O’Hare to Washington, after making it all the way to our hotel, and after we decided to go sight-see while we waited for our rooms to be ready 2 hours after checkout, we got told that it was all cancelled.

Crushing is a good word. It was over instantly. And after we got told it was over, we then loaded our things and walked straight through security, no questions asked mind you, to be seated on tubes of germs and fake air thousands of feet in the sky to be delivered back to our families. Crushing.

Never mind the crushing, the total lack of a screening process upheld by airports was appalling.

Landing back home we were told that we wouldn’t be going back to school, and the bad news snowballed from there.

I hate being melodramatic but an entire generation of kids just got their senior year wiped away. And I know it’s not the end of the world or bad enough to be compared to pandemics in the past, but the gravity of it and the social vacuum and the limbo of it all is like nothing I or we have ever seen. Sometimes it’s depressing, sometimes it’s relaxing, sometimes it’s infuriating, and once in a while it is inspiring.

Our kids will now have pictures of their parents playing animal crossing under quilts instead of walking away from their administrators for the last time with their diploma. A lot of talking beards have predicted that this event will mark some kind of departure from American life before it, and I can’t help but feel jipped because I believe that it will be. Why should I be a part of the generation that christens the new American dream? Why can’t I just walk? It’s a lot. It sure is a lot.

Maybe it’s God, maybe the Jesus freaks will smirk one last smirk and I will burn in hell, but not before I shave my head out of boredom at the collapsed economy and silent streets. Not before I get sick and lose my ability to taste food and drown from the liquid in my lungs. Not before Italians dub this yet another plague in their final editions of their history books.

On a much more literal note, I can’t express my disappointment with both our President’s initial handling of this situation and the entire essence of the government of the People’s Republic of China. For a country so concerned about its people that it placed the very word in its title, it’s rulers seem more preoccupied with hunting journalists for sport than fixing the things they’re reporting on. Maybe if Xi Jingping coexisted with the truth, people would have been helped in Wuhan before they were silenced. Maybe then I would have toilet paper. Maybe then I would walk. Maybe then I would go to prom.