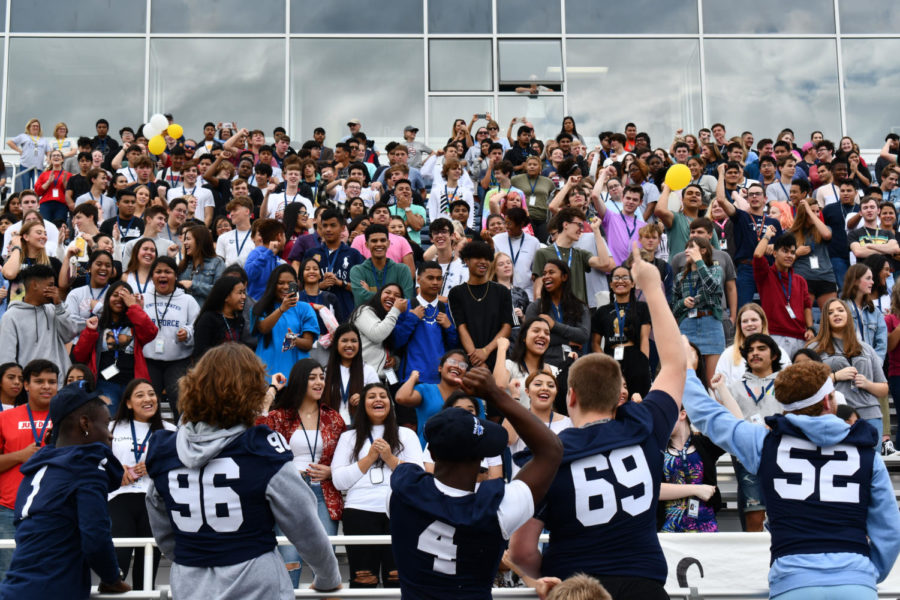 Pep rallies are something I myself only view as an excuse for coming late to class and getting to see my friends, so I was quite surprised to learn that the upcoming pep rally would be taking place in the football stadium.

The thought of going out in the heat early in the morning wasn’t very ideal to me.

I had known beforehand that it was circus theme, but I did not expect to see a man juggling items lit on fire and people handing out popcorn and Cracker Jacks.

From that point I wasn’t really sure what I was getting myself into. My anticipation was at an all time low due to the heat and the precursor of non-existent school spirit; however, I found myself pleasantly enjoying the jokes and atmosphere.

Hearing the band play and chanting our school cheers were really putting me in the state of mind for the game that night.

One of the best parts about going to the games is getting to watch the band perform. Although the circus- themed activities didn’t add much to the pep rally, the Steve Austin impersonation did.

Seeing Mr. McMullen climb on top of a podium doing the impersonation was genuinely funny. I had a blast yelling “WHAT” with the rest of the crowd whenever we were prompted.

Having all the current sports teams coming out onto the field was a good idea at first, but as the rally kept going, it became increasingly annoying.

I wasn’t able to see the games because the teams were crowded around them on the field.

I might add, however, that there was a video of what was going on down below on the scoreboard. This was a nice feature, but I wish I could have seen the games on the field from where I was sitting.

At the end, the seniors won the spirit stick, once again, to the juniors’ and sophomores’ dismay. It almost seems like they are required to win at this point.

The overall pep rally was better than the ones I had attended in the years past, and I give props to whoever put the whole thing together.

Because of this above average pep rally, my expectations for them have become higher, so what I want to know is, what will be next?

Will the pep rallies to come be more exciting or worse? I have high hopes for the future of the Har-Ber High School pep rallies.