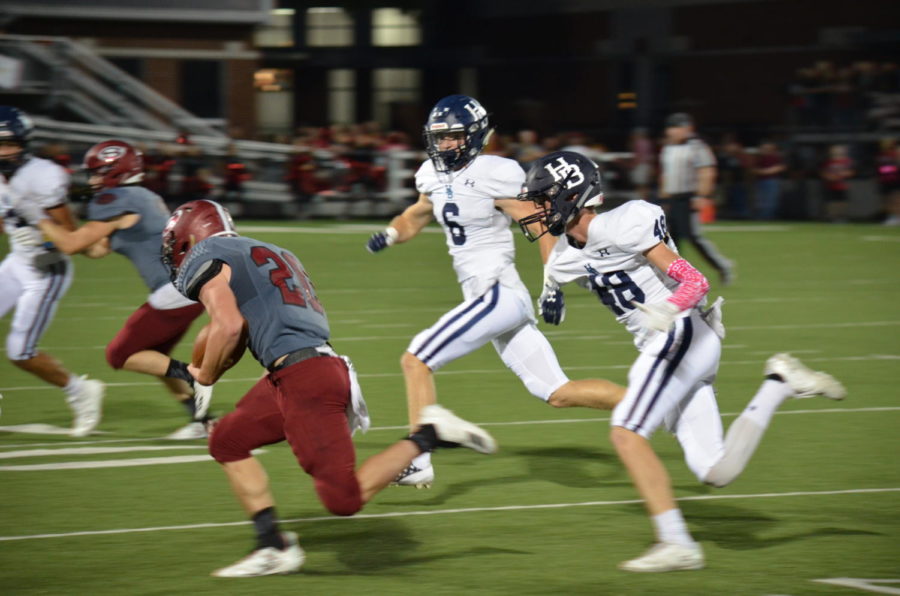 Junior free safety Ty Copher (6) and junior corner back Matt Wright (48) runs down a Bulldog during the Oct. 5 conference game at Jarrell Williams Bulldog Stadium. The Bulldogs beat the Wildcats 43-42 for the first time in 11 years. The original photo was removed at the request of Randy Hutchinson, co-owner of 5H Photography and member of Springdale School Board.

This is true in every sport. You think about the greatest athletes in the world and every one of them does well in high pressure situations.

But many athletes have said that pressure is privilege. If you play the game with no pressure, then it most likely means very little. As an athlete, can you handle the pressure? Make the big time plays? In big time games?

In the 2017 season, Har-Ber Football went into the game with Bentonville undefeated with a lot of pressure to win and deliver. The were nationally ranked.

The quarterback, Grant Allen had four turnovers. After a sub-par year, he transferred to cross-town rival Springdale High School.  There were three other starters who transferred to Springdale: Brock Pounders, Connor Sikes, and E’kyious Sanders.

Go back 20 or 30 years, and this would not have even been considered. Never. Ever. Period.

Many say that this is generational thing. There are many reasons why a player might transfer to another school.

Springdale School District policy allows for instances of extenuating circumstances that may lead to such transfer.

Families move out of their home attendance area. The family may experience some sort of hardship or may request a transfer for personal reasons, which “should only be a rare occurrence.”

The district may rezone, in which case, the parents may want their student to continue at that school. But transferring because a coach puts too much pressure on you or because he is being too tough on you are not a valid reasons to transfer.

These boys who transferred have been talked about a lot in the 7a football community. Speculation has been made as to why they left or whether it is even within Arkansas Activities Association guidelines.

The controversy worsened when a video of Brock Pounders, his father, Springdale football coach Zak Clark and others surfaced where Brock’s father is burning Har-Ber apparel.

The video was disgusting to say the least. Is it wrong to burn Har-Ber gear? Probably not.

Is it wrong to mock our head football coach Chris Wood? Maybe.

But when you do all this with Coach Clark present and then capture it on video, which ultimately gets leaked. Well, that just adds insult to injury.

What are Coach Clark’s motives? Why did he not leave the event?

Maybe we should have thicker skin. Our coaches or teachers may be hard on us, but that doesn’t mean that we just quit and leave our high school.

Football coaches have a reputation for yelling and screaming at their players to get them to play harder. The game of football is one where you must be mentally tough.

Nine turnovers in three of your biggest games at the quarterback position is unacceptable. The transferring athletes’ response to this shows how mentally tough they are.

Maybe this whole situation is the parents’ faults for putting this transfer idea in their heads. Real men wear red, right?

Real men would face a challenge head on, not run from it.

Blame can be thrown all around, but whatever the case may be, this has definitely put a damper on Springdale football on both sides of town. It’s just easier to swallow when you win. Real men, right?

We get it that high school football is meant to be played for fun and for competition. But be a Bulldog or a Wildcat, mistakes have been made.

If you say “real men wear red,” then at least show some respect for the great game of football and for those who step on the field. Do the right thing.

The previous version of this article has been updated. The Herald agreed to make certain changes after a meeting was held with administration on November 5, 2018. These changes clarify the story and have been included above. We regret any confusion.