112 Drive-In Closes after 70 years of business 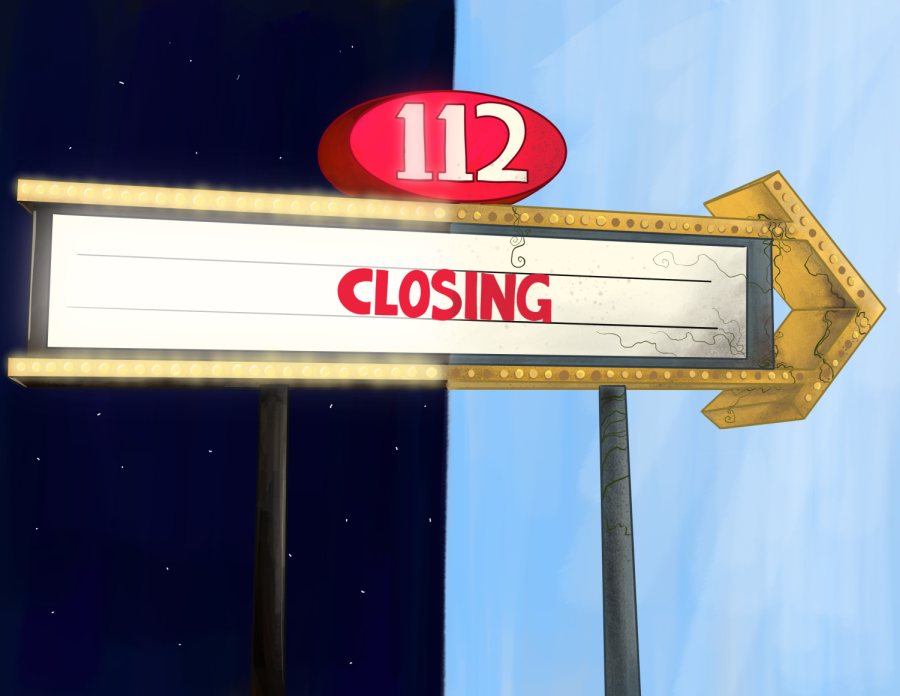 After 42 years of movies and memories, the 112 Drive-In had its last showing featuring Grease and Footloose on August 27th. Cars lined the highway entering and packed the 36 acre field. Several people stood and chatted in a long line, waiting to grab their cokes or hot dogs. A voice surrounded the visitors, sitting in lawn chairs, truck beds, or trunks, telling them to turn their lights off and to tune their radios onto 92.7 for the last time. As Olivia Newton John and Kevin Bacon filled the big screen, a feeling of melancholy overtook the audience. Then, the lights turned back on for the last time, signifying the end of an iconic local hotspot.

“It was definitely really bittersweet to know that so much history and so many memories were being taken away,” senior Phoebe Harris said. “The drive-in has been a place of summer fun for years, and knowing that future teens won’t get to experience it is sad to hear.”

According to the United States Drive-In Theater Owners Association, there are only 318 drive-in movie theaters left nationwide, making the 112 Drive-In a unicorn, and to people like Rachel Corckrell, a special aspect of the Northwest Arkansas experience.

“It put our town on the shortlist of the only drive-ins left in America,” Cockrell said. “It was one of the things that made us really unique.”

Portraying the rarity of the theater, as one of 3 in Arkansas, it was visited by people, like senior Audrey Rogers, living hundreds of miles away. When Rogers traveled to Northwest Arkansas around the age of six years old, she was living in Shreveport, Louisiana, 317 miles away. Without a theater of this kind in her area, Rogers had little idea of what to expect.

“I thought I was going to be in a car and go through a huge tube that was showing a movie,” Rogers said, “Like a car wash but a movie.”

Like Rogers, Cockrell visited the drive-in in her childhood, but she also frequented it several times during her highschool summers.  Tickets were $11 per car, so in high school, according to Cockrell, she and her friends would pile as many people as possible into the back of whoever had the biggest pickup truck. On one occasion, they crowded nine people into an extended cab truck. They would bring coolers with their own food, lawn chairs, and blankets to lay out in the truck bed.

“This was back when we didn’t have jobs,” Cockrell said. “We could pay 11 bucks and get around 18 people to go to a movie or two movies.”

When senior Blake Mussino was younger, he and his family would visit approximately four times a summer. This summer he went several times with his friends. Although they usually just talked instead of watching the movie, they always had a good time.

“A lot of other things close before nine or ten,” Mussino said. “It gave us something to do that wasn’t too crazy or too boring”

The last showing Mussino went to was the Wizard of Oz on the first of the final two weekends before the drive-in closed for good.

“I didn’t really register that it was the last time until we were leaving,” Mussino said. “When we were driving out is when I really felt sad.”

According to Mussino, the theater closing isn’t the end of the world, but it will still be dearly missed by him and his friends.

In the last few years, the drive-in has become more expensive. Tickets were sold per person instead of per car, and they cost $10 per adult and $5 per kid.  Cockrell believes this should’ve been a sign that it could potentially shut down. Yet, Cockrell hasn’t attended a showing in years because of her son, whose bedtime is before the first movie starts.

“We can’t be too frustrated about it [closing] because they need to make money to stay open,” Cockrell said. “It makes me feel guilty because we want to keep things like this around, but we don’t support them with our business.”

Like Cockrell, senior Blake Mussino understands why the owners needed to sell, but he will still miss spending his summer nights at the theater.

“I get that they are wanting to make money on it,” Mussino said. “It just kind of sucks for all the people who have grown up with the drive-in and who like to go.”

The end of the 112 Drive-In reflects a trend both statewide and nationwide. According to DriveinMovie.com, in the late 1950s, there were about 4,000 operating in the nation and 50 in Arkansas alone. Now, these theaters are almost a relic of another time according to patrons, like sophomore Mallory O’Neal.

“I think my generation has always viewed drive-in movies as a thing of the past,” O’Neal said. “Now that we have lost ours, I guess it truly will be.”

To Cockrell, however, the drive-in always functioned as a metaphorical time machine. She feels like if everything looked shiny and new, it wouldn’t have had the same appeal.

“I loved that it was like vintage on steroids,” Cockrell said. “Even the ads looked like they were something straight out of a diner movie, like Grease.”