Breezy, the cleaning robot, makes his first ever appearance 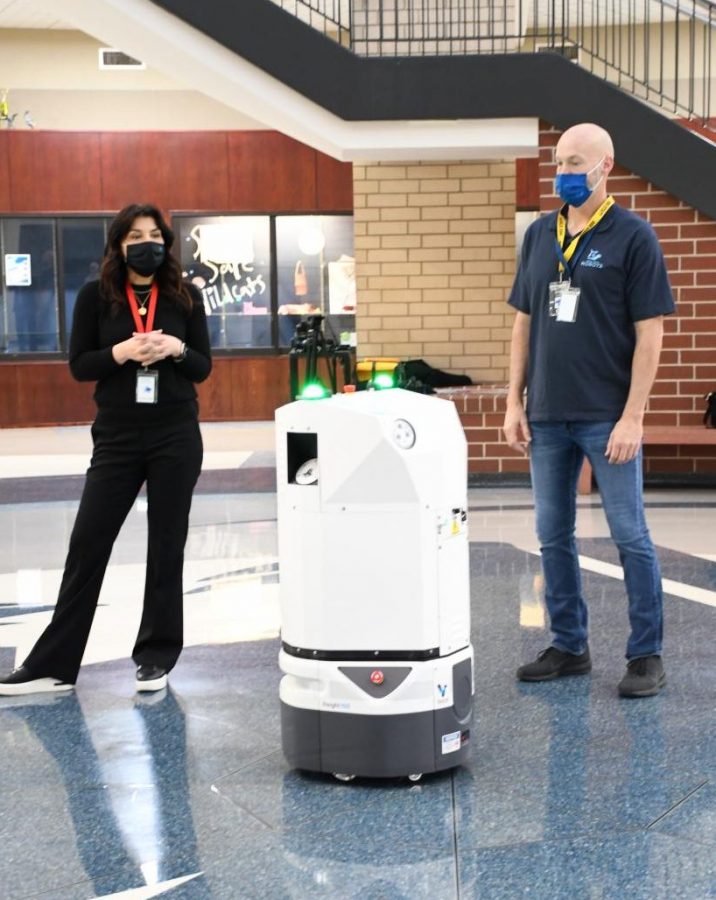 BreezyOne, the brand new disinfectant robot, can quickly sanitize the school at a much smaller price. This new technology was introduced as a more efficient method of sanitation that will be safer for custodial staff. Kimberly Corbitt, the Head of Customer Engagement at Build With Robots, says BreezyOne is the first large space disinfectant robot on the market.

“It is the fastest way to disinfect a large facility,” Corbitt said, “Breezy is designed specifically for really big spaces like airports and schools to disinfect them really, really quickly”

“Chemical disinfecting is the best way to keep your students and staff safe,” Corbitt said. “Breezy is the least expensive, most effective way, to get that disinfectant into your environment.”

BreezyOne costs about $3,000 per month, which is a fraction of the cost to hire people to do the same work. BreezyOne also is safer for the custodial staff who handle it.

“Your janitors aren’t exposed to chemicals that are being fogged into the air, so it keeps your janitorial staff safe and saves you a lot of money,” Corbitt said.

According to Corbitt, the custodial staff in schools usually clean what they see is dirty, rather than disinfecting.

“Your janitors clean things that are visibly dirty,” Corbitt said. “Disinfecting happens on a much smaller scale, and it’s killing the pathogens that we can’t see.”

“The janitors decide which part of the school is going to be disinfected when they push a button on the screen at the top, and that sends breezy into that section of the school,” Corbitt said. “ Breezy knows where on the path it should be fogging, so it’ll navigate into a classroom, then turn around and fog as it leaves the classroom.”

To disinfect the upstairs classrooms, a janitor will press a button on BreezyOne’s screen, sending it to an elevator. The janitor then lets the robot onto the elevator and pushes another button once they have reached the second floor, telling BreezyOne it is upstairs.

Har-Ber is the first school to use a disinfecting robot in the nation.

“Springdale is a very innovative district as a whole, and Har-Ber was chosen because it’s a big high school with a complicated floor plan,” Corbitt said. “We knew that by having Breezy there, we would be able to show off what it could do.”

Corbitt also hopes that BreezyOne will inspire students to think about creative ways to solve problems.

BreezyOne’s disinfectant can also combat other illnesses such as the flu, meaning it will be used even after COVID-19 passes.