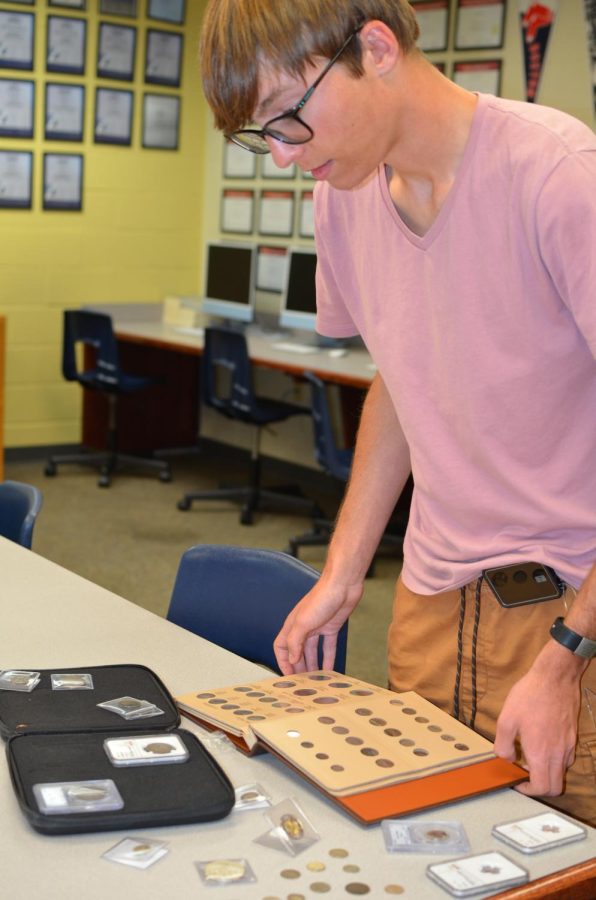 Inspired by his grandfather and his own love for American History, junior Braydon Byrd has accumulated a collection of over 3,000 coins in the past 8 years. Byrd purchases coins from a local coin shop and eBay, but he also picks up coins from the ground and looks through his spare change for anything he deems as notable.

“I started when I was nine years old,” Byrd said. “It started with my grandparents, they taught me a lot about coins. The first coin I ever got was a 1958 Denver minted penny.”

According to Byrd, his collection has grown exponentially since his first penny, and he is drawn to coins because of their rich history and beautiful designs. Byrd collects modern coins along with historic and foreign coins.

“My favorite coin is probably my 1807 Draped Bust Liberty half dollar,” Byrd said. “It’s my favorite because of the overall design. With modern coins we don’t really design beautiful coins as we did back in the day. There’s a lot of craftsmanship that went into making older coins so I felt like it’s more personal.”

Byrd believes that his reason for starting and continuing this hobby can be credited to his personal interest in American history.

“One of the coins. I want to get is a 1763 three pence,” Byrd said. “That’s not American, but it kind of is. In 1773 it was the colonial era, so King George was the king of Britain and he was ruling over the colonies, so the currency we had then were the British pences. In 1763, it was the end of the Seven Years War, and it was the start of, essentially, the revolution to American independence.”

Byrd is looking for this specific coin because of its date’s significance in American history. Byrd has learned many other pieces of history and stories through coins.

According to Byrd, most coin collectors are much older than he is. Despite this age gap, he has a local community of fellow collectors who meet once a month at the Northwest Arkansas Convention Center for a coin meeting.

“There’s trading, you could sell your coins if someone’s interested,” Byrd said. “Sometimes there are presentations where we’ll do a specific topic. Like one day we might do wheat cents or large cents and another day we might do Standing Liberty quarters. It’s mainly older people, but I think my influence has definitely influenced others to start collecting.”

Byrd uses social media to connect with collectors beyond the local community.

“I used to get us to give main or general information about them, and just tried to teach people about the history of coins because I personally think it’s very cool and important,” Byrd said. “I partake in a tradition in the coin community called ‘Toner Tuesday’, which shows different color varieties of coins due to oxidation.”

Oxidation, according to Byrd, occurs when oxygen reacts with the copper in coins causing discoloration. Byrd has developed the ability to identify a coin’s science, history, and authenticity just by looking at it. He also has developed his own opinions about certain coins.

“I know this is a very unpopular opinion,” Byrd said, “I think they should stop making pennies. We’ve made quite literally hundreds of billions of pennies.”

Byrd believes that his hobby is an inexpensive and fun way to learn about history, and encourages others to take up his beloved hobby.

“Overall, if you like history, you don’t have to have a lot of money to be a coin collector,” Byrd said, “You could pull a quarter out of change, and you know that’s just 25 cents out of your allowance to hold a piece of history, or it could be something you picked up off the ground.”