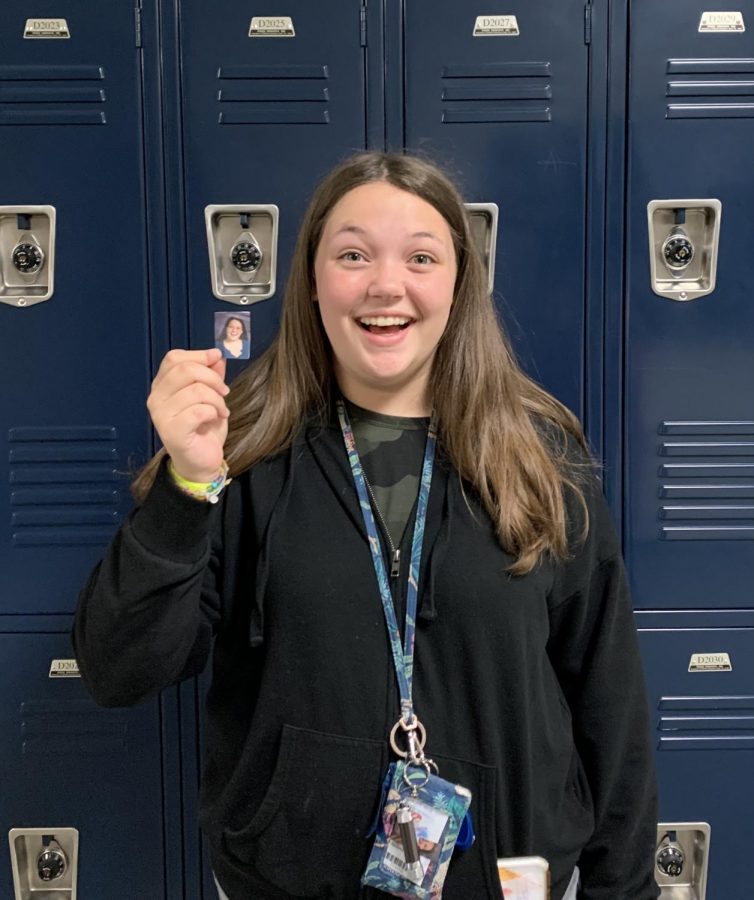 When junior Audrey Rogers decided to make an unconventional face for her school yearbook photo in early September, she had no idea that the same picture would be seen in classrooms, hallways, and lanyards across the school district. Now, two months after the first copies of the photo were printed out, 53.3% of students have seen her picture in the school, and 21.9% have a copy of her picture that they keep in their lanyard or binder, according to a survey sent to the entire student body.

“A pretty good number of people have come up to me and commented on my picture,” Rogers said. “It’s a little creepy.”

Rogers’ original intention for the pictures wasn’t to become popular or garner attention, but instead, to make her family and friends laugh. She brought these pictures home to her mom, who thought they were hilarious and printed several copies. The next day when she brought these copies to her advisory class, juniors Kinsley Huber and Emma Evans decided that they wanted to scatter the pictures around school.

“We got this idea that we should print them out and stick them all over the school because we thought it was funny,” Huber said. “We wanted to make a meme out of Audrey because Audrey is quite literally a living meme.”

According to Huber, Rogers and her friends have put at least 100 copies of the photo in schools across the district, including Har-Ber High School, Springdale High School, and Central Junior High School..

“We just started going to random classrooms and taping them up everywhere,” Huber said. “Then people started noticing this random girl taped all over their classrooms.”

Ever since her picture was first copied, printed, and displayed around the school, Rogers has become relatively famous at Har-ber. She has been recognized by several people she’s never talked to or even seen before.. Although becoming popular wasn’t her goal, Rogers isn’t bothered by the attention.

“I never intended to be in the spotlight,” Rogers said. “ I like a good joke and don’t take myself too seriously, so overall, I don’t mind.”

Huber believes that despite Rogers’ nonchalance, she secretly likes the attention and popularity.

“She loves that people are asking who this girl is and recognizing her,” Huber said. “I think she’s secretly proud of it.”

Regardless of the attention the pictures have garnered in the last few months, they bring comedic relief and happiness to those closer to Rogers.

“Everytime I look at it, it just gives me so much joy,” Evans said. “It’s just so Audrey.”

Her “fans” are hoping for a sequel, but Rogers doesn’t know her next step.

“I don’t know if I’ll do anything else this year,” Rogers said. “There’s always next year’s picture though.”