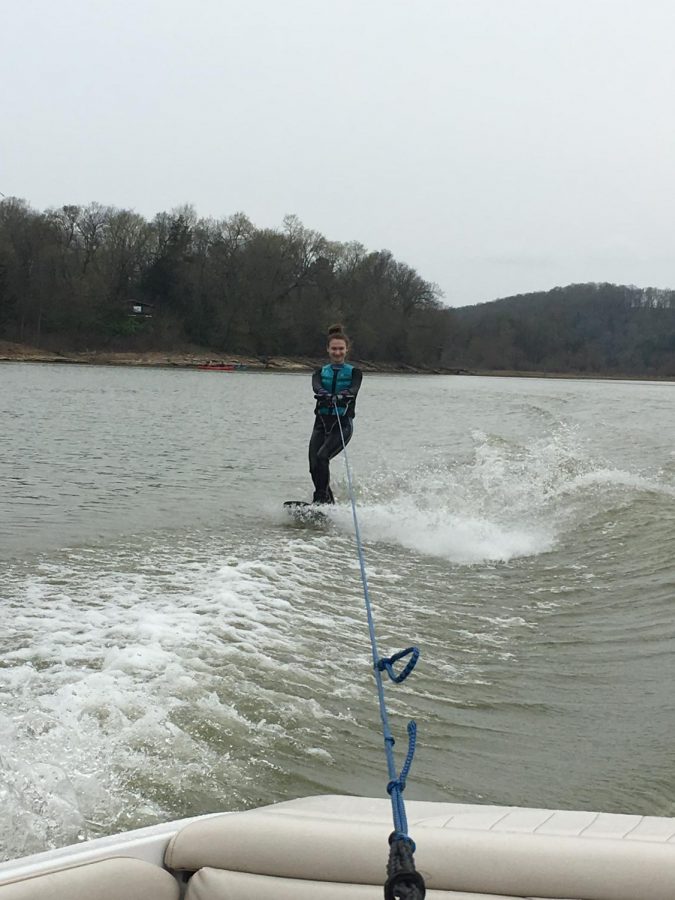 On April 1 every year, junior Paige Easterling steps into her wetsuit as she prepares to start her water ski season.

Paige has been water skiing for 15 years. That means she began learning to ski when she was only two years old. Her dad taught her to ski using the barefoot boom method.

“I placed Paige in two skis that are bound together,” John Easterling, her dad said, “I had Paige hold on the barefoot boom with one hand, and Paige with the other, after Paige was stable I instructed the driver to go. Paige then would ski about 40 feet at a time until she improved.”

Since Paige was so young, she does not remember learning to ski. Today she does not ski using two skis, she only uses one. That’s known as slalom skiing. Although she can do more than slalom. She can also trick ski.

Those are some of her favorite things to do while skiing.

She skis with her dad, her brother and her best friends family at  Beaver Lake down by Beaverama and Blue Springs Cove.

“It’s really fun to challenge yourself and just have fun on the lake,” Paige said.

Paige plans to ski for the University of Arkansas in college. There are no tryouts necessary to make this team.

According to the university’s website, their team is a three event water competition water ski club. They compete against other teams in the region.

“It’s taught me that even if you fail over and over again, countless times, if you keep working, you will achieve your goals,” Paige said.