Choir continues to sing through pandemic 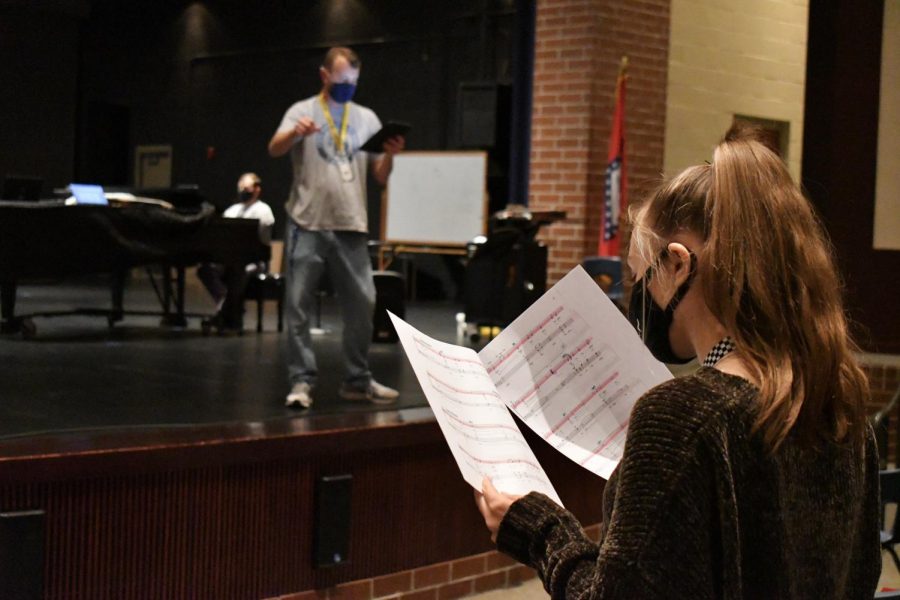 During third period Bel Canto, choir director Clint Piantalto jokes about putting together a will to teach choir. The health and safety of students has been the main concern for the choir director, but it is no secret that they are just as worried about their own health.

“My wife and I finalized our will and trust so in case something happened to me, they’re not in trouble financially,” Pianalto said.

Between masks, complicated regulations, and seemingly impossible class sizes, the choir year is off to a rocky start.

Junior Marissa Williams is a member of  Lighthouse and Camerata choirs. According to Williams, wearing masks is one of the most difficult changes to deal with in choir.

“When we breathe in the masks sometimes go in our mouths, so we can’t get a good breath,” Williams said, “and we can’t sustain our notes. Being able to tune to each other is really hard because we have to be spread out a ton, so it’s hard to stay in tune and stay on beat with each other.”

One of her concerns is about the concerts and performances that will not happen due to the pandemic.

“The unsureness in the air is really dreadful,” Williams said.

Although she will miss some aspects of the choral experience, she still looks forward to being in Lighthouse.

The choir directors, Micheal Brown and Clint Pianalto, have been jumping through hoops since before the first day of school to make this year as normal as possible for their students. Pianalto wants to keep the choir space as safe as possible, so he isn’t responsible for getting a large group of students sick. The state has given them mandates to follow, but they have even increased these to provide the safest environment possible.

“We’re keeping everybody six feet apart. We have four different rehearsal spaces that we can move students in and out of, so we’re being able to take every body and put them in one spot and then keep them in up to like 20 minutes. We can go 30, but we’re rarely ever getting to that 30-minute length,” Pianalto said. “Then we spray disinfectant in every chair after every person has sung in a space.”

Pianalto explains that he is very thankful for Brown because they have been running around all day, trying to accommodate the new safety measures.

“We’re very lucky because we have two teachers and not a lot of the other schools in our state even have that.” Pianalto said.

Another challenge is the concept choir members know as “circle up.” This is helpful when learning a more complicated piece because the students will circle up in their voice sections with one student leader, to go over difficult music. The student-led aspect of choir has been sacrificed due to the 6 feet apart mentality.”

“We can show you how to do it,” Pianalto said, “but when you guys do it together and on your own, it becomes more authentic.”

The biggest question hanging over choir members’ heads is the logistics for concerts and performances. Pianalto explains that he has been looking into different online virtual choir and solo competitions, a virtual talent show, and having pre-recorded virtual performances. With a large amount of choir members already being sent home, the choirs question whether or not these plans will still be feasible.

Seeing everybody interact and sing, even with the mask on, has been reassuring when Pianalto worries that he won’t be able to give his senior choir members the same experience they’ve had in the past years. As for reassurance, Brown and Pianalto have been choosing specific texts and music to send positive messages of hope and peace.

“That’s not only for the students, but that’s for Brown and I too,” Pianalto said.

Specifically, they are excited to introduce the choirs t0 the song “Secret For The Mad” by Dodie.

“We really like the text and we think it fits for now,” Pianalto said, “By Christmas we’re going to have a virtual choir that everyone is going to be a part of.”

Brown and Pianalto have been emphasizing ideas of kindness and respect as well as horripilation.

“That is goosebumps, how we get it, and how we keep getting them,” Pianalto said. “How we revel in that fact that music stirs our soul  and how we get back to that each time.”

According to Pianalto, these things as well as hope and positivity are what have been getting the directors and students through the uncertainties of each day.