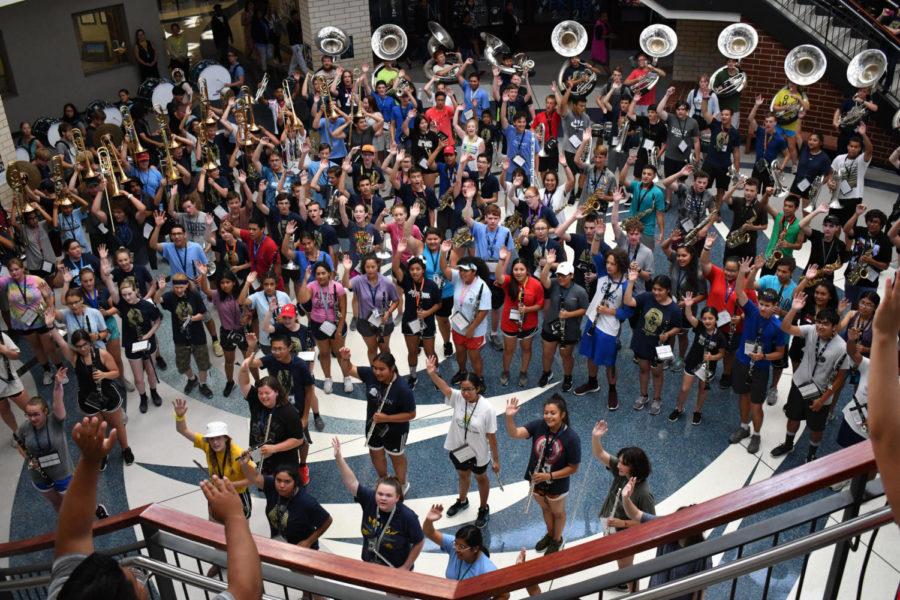 If a student were asked what the most fun parts of a football game would be, a lot of the responses would be about the band.  One of the most exciting parts of the first semester is seeing the Wildcat Marching Band’s wonderful, up and coming performance in the rotunda and at Wildcat Stadium before football games.

Each year, the band, under the direction of Jeremy Ford, learns and memorizes a show to perform at games, tryouts and competitions.

Every performance is unique and special in their own ways, with Ford implementing different ideas into the performances to spice things up.

Last year’s performance, “Reflections,” was a mirror-based performance.  The 2017 show was based around famous music from the rock band Queen.

During the band’s Queen performance, all of the band members at the end of the performance laid down in a Q formation for their finisher.

The performances leave everyone cheering and wanting more; the shows are always exhilarating and an absolute joy to watch for many students.  With this in mind, this is what students should expect to see with this year’s new performance.

“We have a new way we write our drills, as well as the previously mentioned visuals which are more like a complicated dance routine rather than plies and lunges,” Gilder said. “It will be quite a spectacle to the eyes.  There are a few parts in the performance that are difficult but I wouldn’t remove them. In all honesty the piece is perfect the way it is. I wouldn’t add or change anything about the piece, the players or teachers.”

One of the major differences from this year’s performance compared to previous ones is that Exotic Impressions wasn’t made by any of the band teachers.  This performance was purchased by Chris Church, one of the band directors from Southwest Junior High, rather than being handmade.

When asked if he knew why this decision was made, Gilder said, “I don’t think I do, but I think it’s a change for the better. No offense to Mr. Church, of course, but it’s a different feel and it’s a good different,” Gilder said. “It will surely leave the audience in awe. Although Friday’s performance won’t be the full show, it will still leave people cheering and clapping.”

As the weeks go on, more and more will be added to the show until it is complete, so expect something new every time you view the performance.